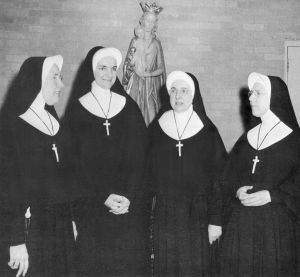 The history of Our Lady of the Greenwood Catholic School begins with the history of the parish that runs the school to this day, Our Lady of the Greenwood, Queen of the Holy Rosary Catholic Parish. It was founded in the 1940’s in response to a growing need for a new parish to serve the Catholic population of northern Johnson County. The growing area of the county was being served by St. John’s Parish in Indianapolis, until mid-1948, when land was purchased for a new parish. Seven acres of property were made available in August 1948. Ground was broken on April 23, 1949, and the cornerstone was laid on July 11, 1949. It was finished and dedicated on February 19, 1950.

Five years later, the first school was built, at a cost of $140,000. The Sisters of Providence served as teachers in the new school. The first principal was Sister Catherine Joan, SP. A portion of the school was used to house the sisters in the early years of the school. However, as enrollment increased, a convent was needed. The building was completed in 1955 for $55,000. Continued growth necessitated enlarging the school in 1959 at a cost of $90,000.

Our Lady of the Greenwood parish has been blessed with fifty Sisters of Providence who taught at the school from 1955 to 1996. The sisters left a rich legacy as they lived and worked among us for over 40 years. A list is provided below of all the sisters who have served our community over the years. We are thankful for them all.

In 1987, a new addition to the school was completed. Another addition was finished in January 2005, including the new Parish Life Center, four classrooms, a cafeteria, a kitchen, and administrative wing. It was dedicated on January 16, 2005 by Archbishop Daniel Buechlein, OSB.